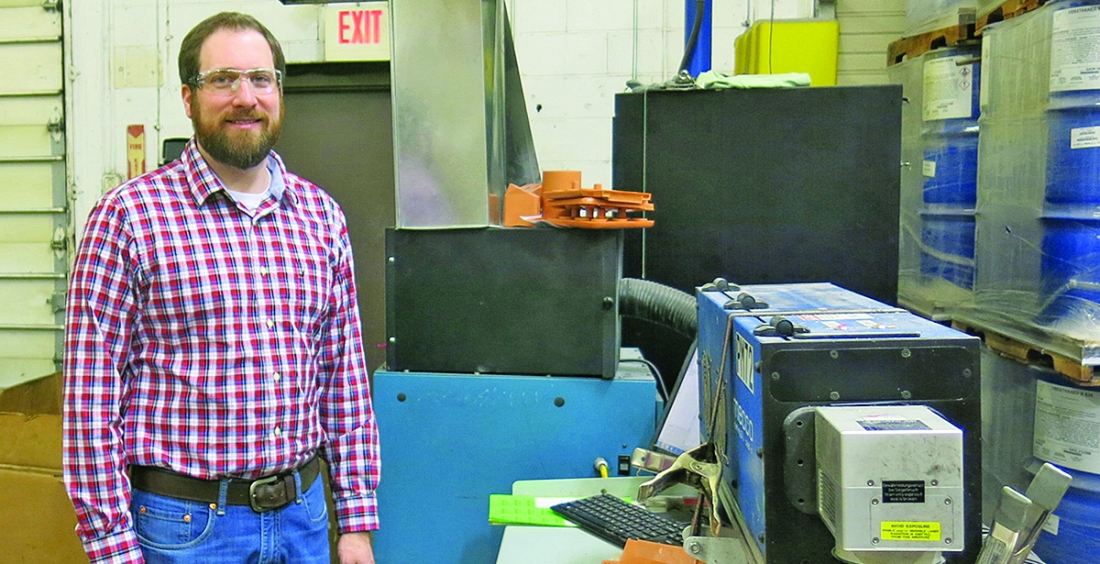 An organic laser engraver unit has been saving time normally lost to processes like date-coding parts for Seco Machine, a division of A. Stucki Co. in North Canton, according to a product manager.

A. Stucki, a developer of rail car industry products since its beginning as a family business in 1911, acquired Seco in 2010. Also located in North Canton, Seco is a machined product and mold manufacturer that previously had supplied A. Stucki, said Jon Kaufman, product manager, urethanes and polymers, for A. Stucki.

Originally, when Seco began producing elastomer products for the rail industry, workers used rotary-dial tools to date-code parts. At first, it wasn’t too time-consuming, but as more jobs began to stack up with more molds, it meant taking more time for the date codes, Kaufman said.

“Each … date code changed at the beginning of every week … We were wasting almost a whole day on Mondays switching date codes and not pouring urethane,” he said.

After seeing a demonstration at a trade show, Seco added a carbon dioxide-based organic laser engraver to its equipment for about $30,000 in the summer of 2013, Kaufman said. With the engraver, instead of switching through rotary dials, the company can track the lot of parts by date of manufacturing, then mark them with a date code in quick succession.

“It’s just four digits. We can mark it in about a second, maybe a second and a half,” Kaufman said. “So really, you’re just tying up the labor of one person in a shift compared to an entire production staff for that day.”

In terms of time saved, the engraver saved about 20% of production time for staff, Kaufman said. It allows for quick reproduction of the same text for a set of parts, but can also do logos or other images, which require more skill to manage contrast and resolution of the finished image.

“You’ll have different intensities that are needed for, say, leather, wood or urethane, or even the different durometers and families of urethane,” Kaufman said.

Though those types of materials are more common, the engraver can handle more unconventional organic materials as well. Kaufman has worked on cellphone cases, a set of antlers and, in one case, a tomato, he said.

“It actually burned away the top skin, and you could see the second layer of it, and it was detailed,” he said. “It was awesome.”

Another point where the engraver can save time and labor is by bypassing surface preparation, Kaufman said.

“The laser doesn’t care about the surface preparation,” Kaufman said. “That’s one thing that makes it a lot easier on the handling and labor for us.”

The addition of the engraver is part of Stucki’s strategy to diversify its offerings, expanding its reach beyond rail, he said. The company now has some products involved in the construction, concrete, oil and gas, and wastewater treatment industries.

With the new engraving capabilities, the company is aiming for custom, low-volume jobs that are more customized.

The company also has created an industrial sales force to reach a wider variety of jobs.

“That’s one place where it takes a little time to get your foot in the door and build those relationships, but we definitely think we’re in a position to take advantage of our capabilities once those relationships are built,” he said.

A. Stucki is bringing on employees as part of the industrial sales team, and assigning overlapping duties to some current sales staff, Kaufman said, though he did not disclose a specific number. The company did not have to hire new employees for the laser engraver.